Four pulls for every push

In this project I’m setting out to commit a heinous violation of my tightly held tensegrity principles. I believe that there are certain foundational ideas in tensegrity structures, and one of them is that any element relationships which introduce shear, bending, or torque are forbidden.

That is not to say that you can’t just do it, but I argue that a crisp mathematical definition is best for establishing the category “tensegrity”. There’s more to be said about this, but I’ll save it for another post.

The violation in this project is for a noble cause: to illustrate a point and help me think through potential innovations which make building these structures easier. This tensegrity will exert a force which would tend to bend its struts.

The basic structure is the same six-strut “brick” as last time, but this time I’m not interested in tightness or the separation of tension from compression.

This will be a quick and dirty build, and I will use this nice “nucleus” scaffolding element that I once made with my friend Graham Smith at his “Harbour Hut” workshop across the river in Amsterdam (the Hut has since been bulldozed to make room for fancy homes). 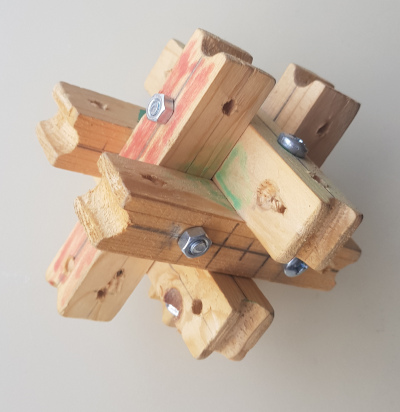 The key feature of this scaffold is that it forms a temporary nucleus for holding the brick’s struts so we can worry about the tension, but more importantly that you can disassemble it later.

With a little tape it was easy to prepare the compression in more or less the right positions, so that I could wrap tension around it. 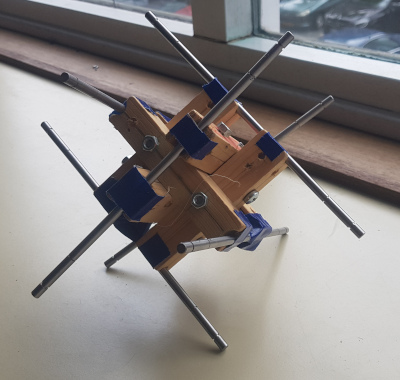 The struts I’m using were found many years ago in a surplus shop in Toronto (Active Surplus, back in the day), and they are probably the stainless steel axes of some kind of factory roller system, because they have precisely machined grooves at two positions near their ends.

It was these grooves that suggested this experiment to me, because each bar had 4 of them.

I really took the easy way out for this model by using a stiff thin wire which I was able to wrap around the bars such that the wire settled comfortably in the existing grooves. 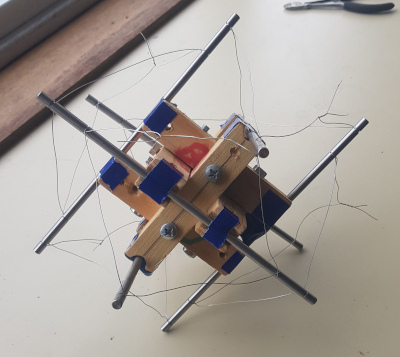 The amount of tension is not impressive at all, and you can see that the wires are not even particularly straight. But like I said, this time it’s not the point.

With the tension hooked up and more or less strong enough to hold things together, the next step is to remove the bolts holding the nucleus together. 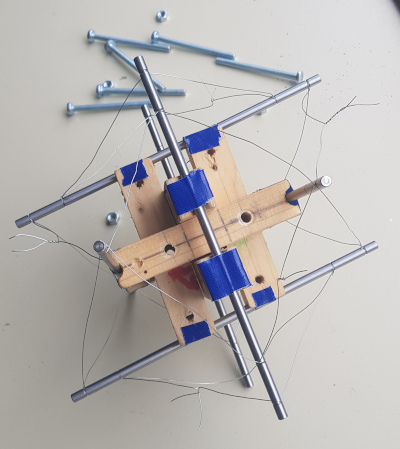 With no bolts, the parts of the nucleus fall away like Jenga bricks. 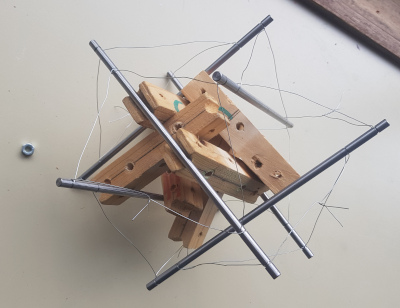 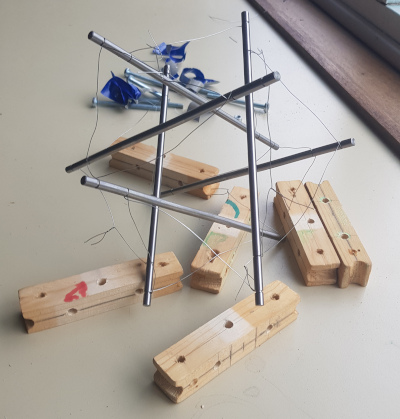 What we are left with is six bars suspended within six diamond-shaped tension loops. The loops join the inner grooves to other outer grooves. 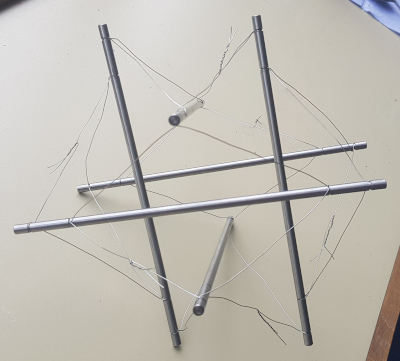 It’s not hard to imagine these connections being rigged to slide to different positions along the bar (rather than in grooves). I wonder how it would behave.

Since it can be a little hard to pick out the way that the diamond tension is working here, I added a loop of cord to highlight the nearest one. 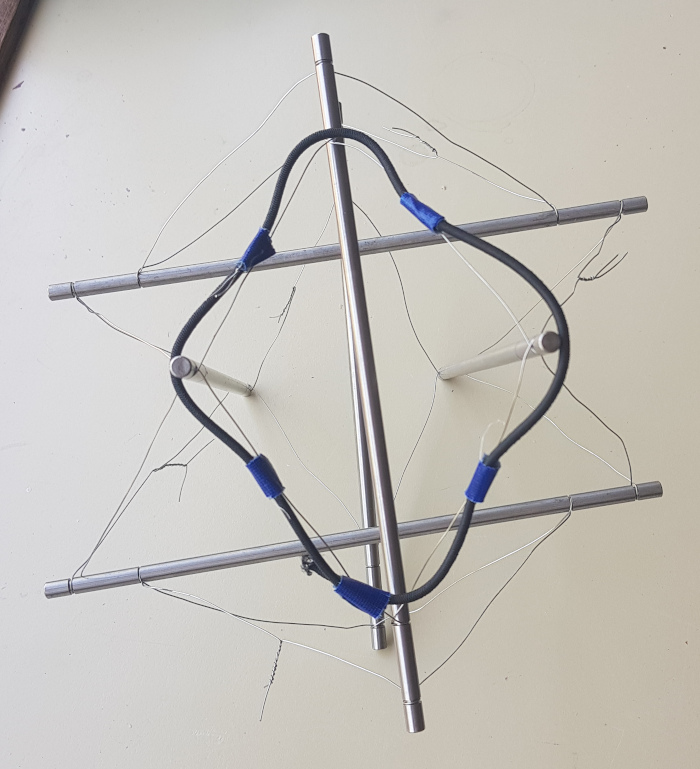 Displacing the joints into separate connections helps me think about about a potential optimization where there is a “diamond of tension” prepared together with each strut.

The diamonds can just as well be pre-measured while slack and later tensed when the whole is constructed and the struts lengthened, so that would achieve prefab tension.

My apologies for violating a fundamental tensegrity principle for illustrative purposes, but with the cheesy wire tension it should be clear that nobody is supposed to take this tensegrity seriously anyway.