An unusual opportunity presented itself this summer when I found out about the Fascia Research Society getting together for a conference.

Fascia is the tension that holds our bodies together, and it permeates us from head to toe. People who work with it, whether treating patients for pain or optimizing athletic performance, also happen to know something about tensegrity!

Last summer I came into contact with May Kesler who had proposed a dance performance for the FRS congress in Montréal, and she suggested that I could maybe make tensegrity structures for on stage for the dance.

This was interesting enough for me to take the plunge. I could not resist having so many people seeing my structures being used in such a creative way.

I built some towers which were to become part of the performance. 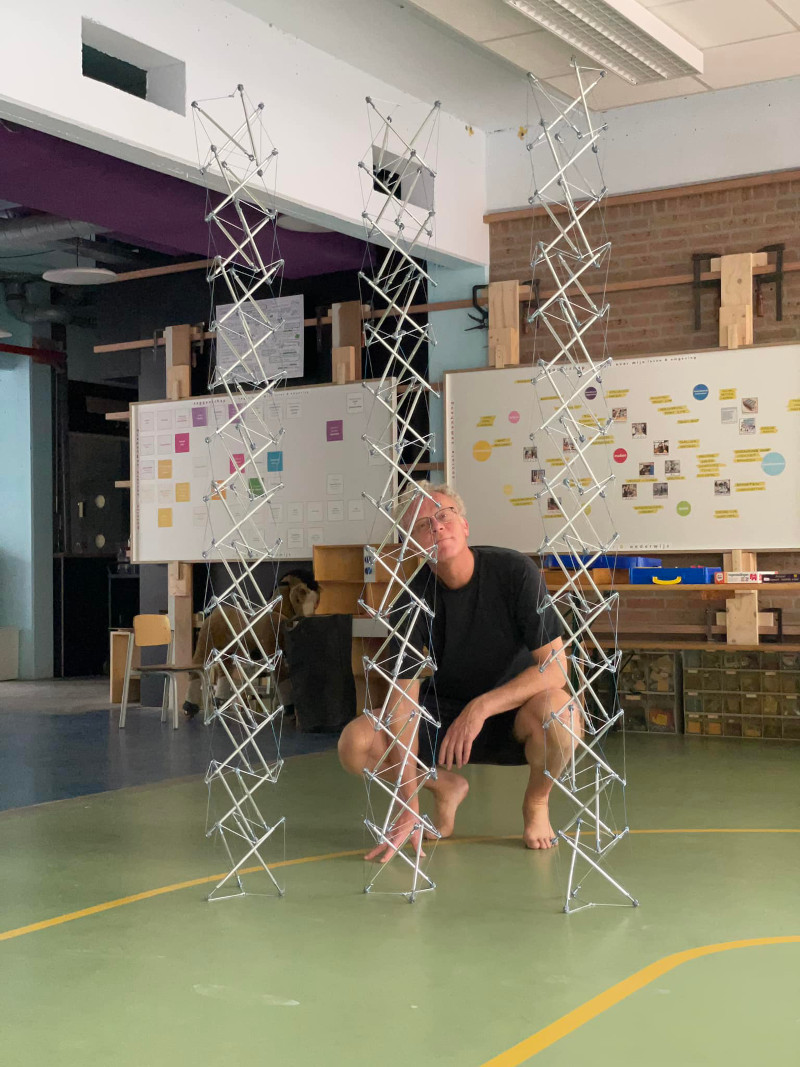 Armed with my new push bolts, I was able to build these towers quite quickly, at least compared to how I used to do it.

I booked my flight and hotel and packed up a suitcase full of tensegrity.

I compacted and took along some other goodies, to add some variety to the structures for the dancers to work with, like the torus which can rotate within itself. 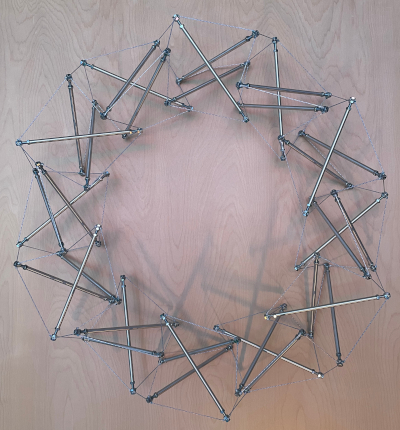 Also, because mitosis seemed to be a relevant structure for a fascia conference, I prepared a few of those. 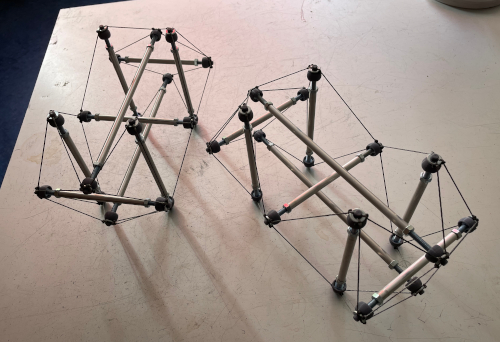 Soon after arriving, we got together at a dance studio for a rehearsal.

While the dancers started getting familiar with the tensegrity structures and their dynamics, my son Mitch and I busily assembled the towers. 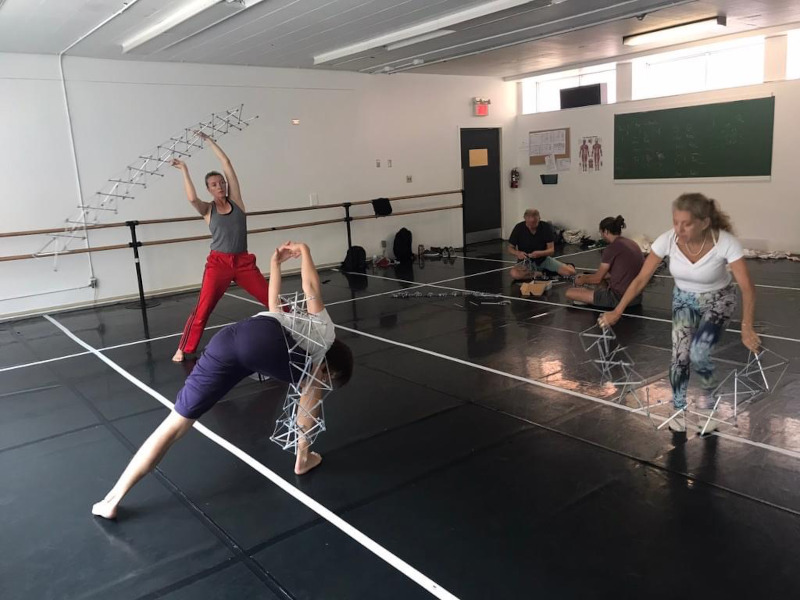 Quickly the dancers started to tune in to some ways that the tensegrity structures could be integrated into the fascia dance.

May Kesler saw that Elise Vanderborght was picking up the theme of coming out through the torus tensegrity. 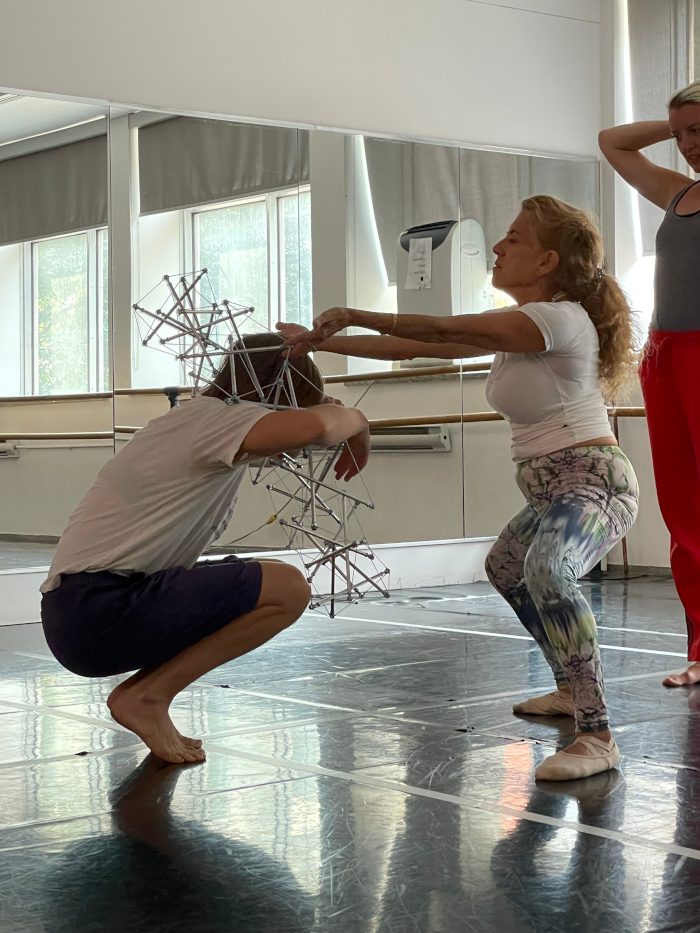 Gabrielle Desgagnés (on the right) chose one of the towers as her dance partner. 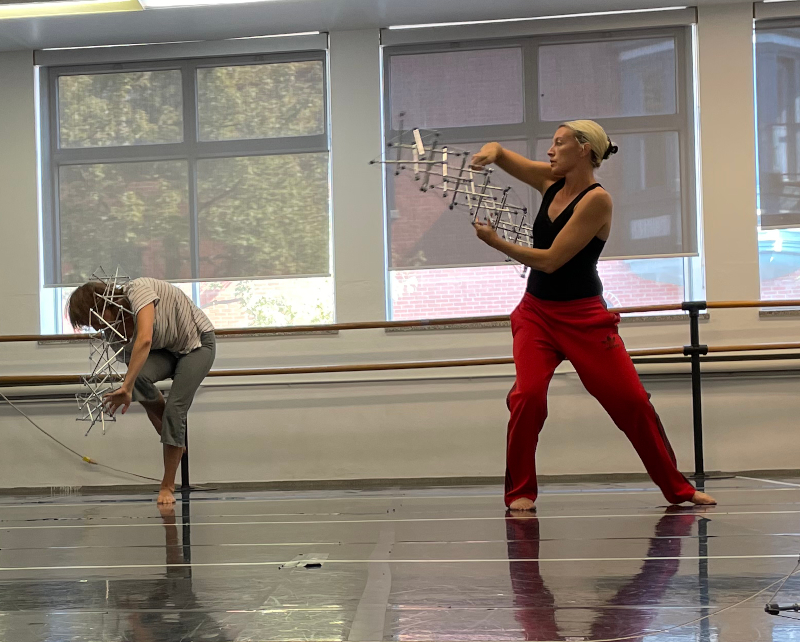 It was delightful for me to see these creative body movement people learn about and rapidly tune in to the ways to use the dynamic characteristics of the loose tensegrities to their expression of the theme. 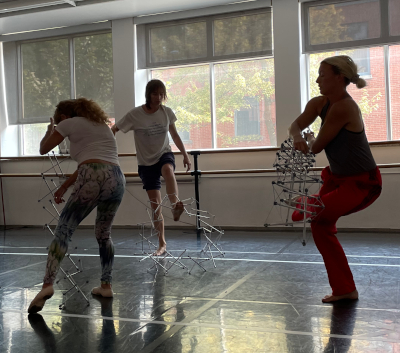 From here on I had to leave it to the dancers to work out their performance.

Since I was not a typical attendee, my approach to the conference was different.

I attended and very much enjoyed and learned a great deal from the keynotes, which were largely about the science of fascia.

When other people, the practitioners, went to sessions with teachers, I went wandering around to see what kind of conversations I could have.

Back home I had been reading a book by Tom Myers, and since I had sent him a model which was on display in his booth, I sat down and had a few good chats with him. 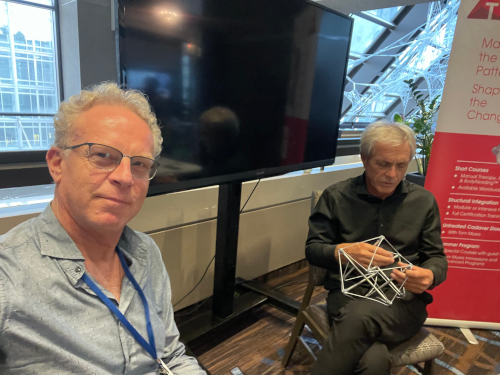 It was also great to shake hands with Bill Parisi who immediately wanted my models for his booth as well, and to talk about possible synergies. 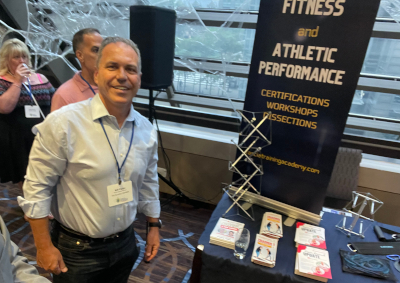 A few times I met up with my biotensegrity friends and at one point during the lunch break they all collaborated on building the [mitosis] tensegrity (based on Tom Flemons’ work) which I wanted to give to Dorothea. 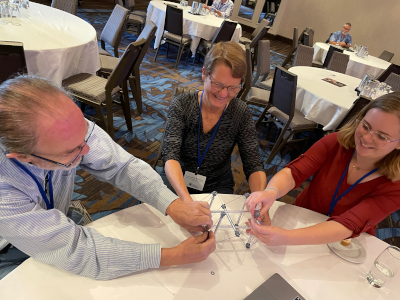 In the lead up to the congress, I had been on chat with David Lesondak about the Body Worlds display at the congress, but how this works was all unfamiliar to me, so it came as a surprise that it turned out to be true.

They wanted my structures to be part of the exposition! 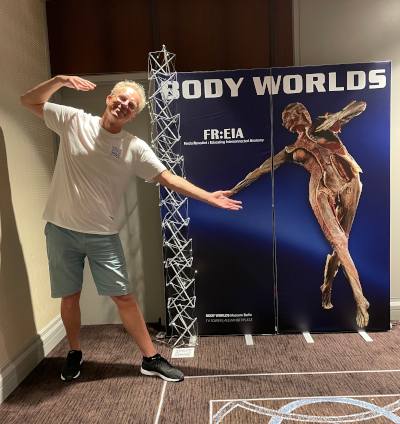 Fortunately the rehearsals were over and I was able to bring one of the towers and the torus from the dance performance for them to use.

This is what it looked like at the opening: 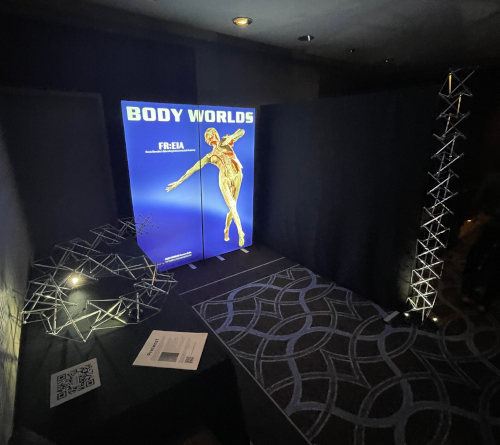 The actual dance performance itself was, to my eyes, like a vortex of different kinds of creativity coming together with a message which perfectly rhymed with the theme of the congress.

My tough tension constructions being swung around by dancers was not something you could have told me six months earlier, because I wouldn’t have believed it.

It was met with much applause and a standing ovation.

After the show, I wanted to pass the towers on to people who would appreciate them rather than taking them home again.

I found interested people, including Tom Myers, the Body Worlds exposition, and two of the most enthusiastic in the biotensegrity crowd Mariana Barreto Ibarra and Bradley Fullerton. 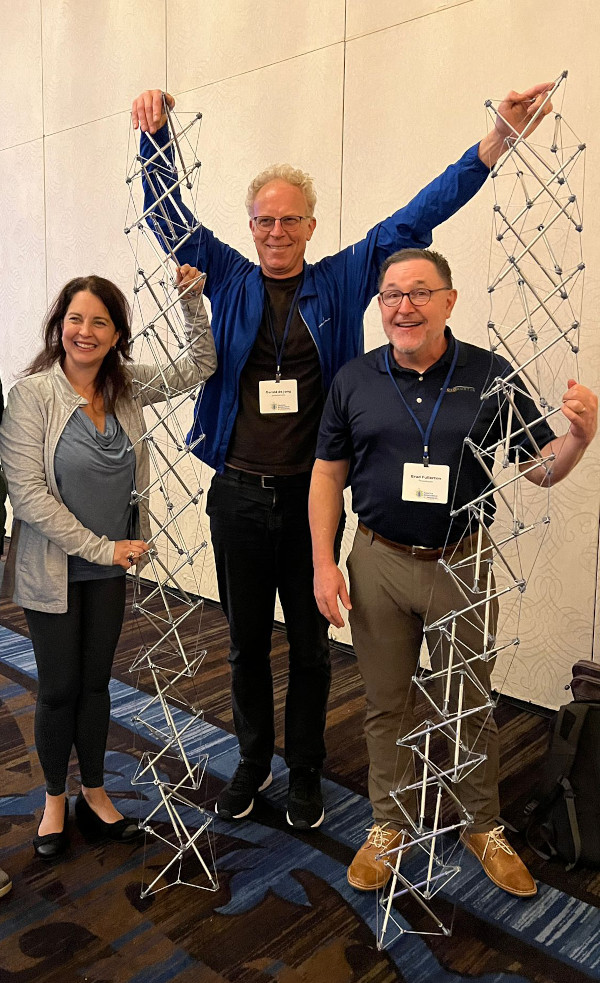 While preparing one of the towers for transport, I had removed one of the middle twists entirely.

Seeing John Sharkey nearby, and since I had also had some really good conversations with him already, I challenged him to re-insert the compression struts

He had to prove himself, and he rose to the challenge. 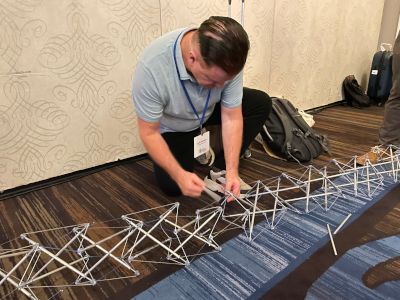 He rebuilt the missing section with the correct chirality first time, of course. You gotta get up pretty early in the morning to slip one past John.

I took a chance by investing time and money in going to this congress as probably the only attendee who has nothing to do with fascia science or treatment.

I was there to satisfy my curiosity about how the fascia community would look at the results of my two years of tinkering/research: prefabricated tough tension networks and adjustable length compression struts.

Fascia practitioners, it turns out, are very receptive to the potential for these adjustable structures in the context of learning and teaching about the dynamics of the body’s fascia.

Just before I left, the biotensegrity people and others wanted to be in the picture with my tensegrities. 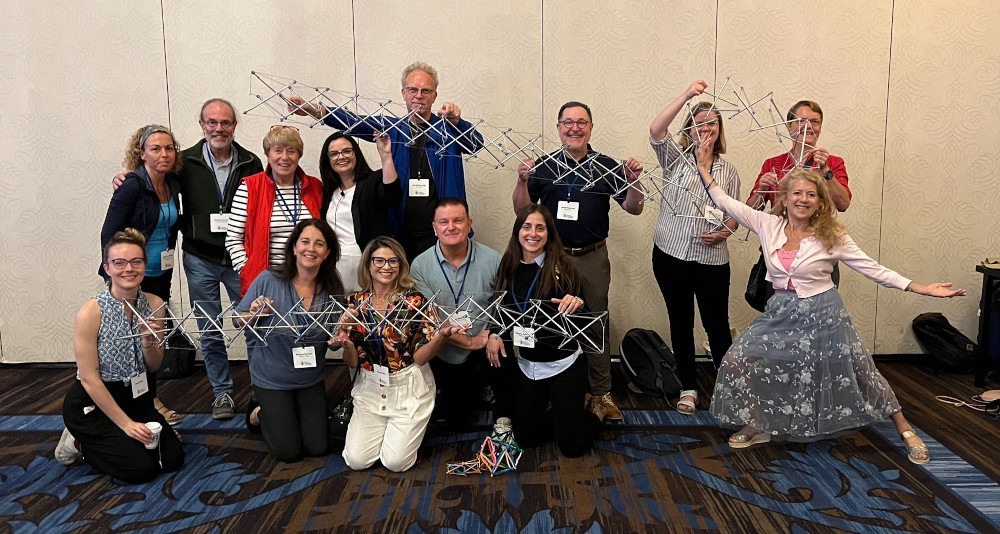 Going to this congress pointed out a need in the fascia community.

I’m now looking into some channels for getting my durable tensegrities into the hands of larger numbers of people in this field.