Early on in our building experiments we created the twist sisters using some materials that we had cobbled together and bought at a surplus store long ago. They’re still nice to grab and squeeze, but we were playing around one day to see if we could make a twist in a very different way.

With just one single elastic cord loop, two ball chains, and three PVC tubes we were able to build a twist “with a twist”. 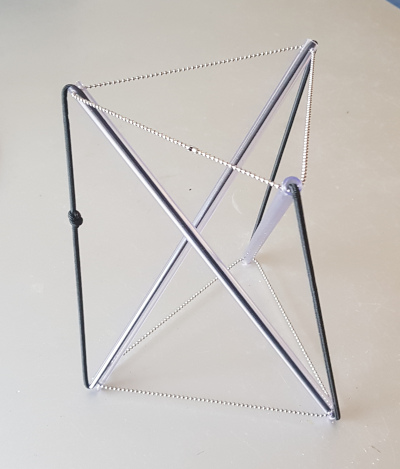 This twist actually has some nice new features!

As we played with it more, we realized that it could be adjusted, and it would remain in the adjusted form. 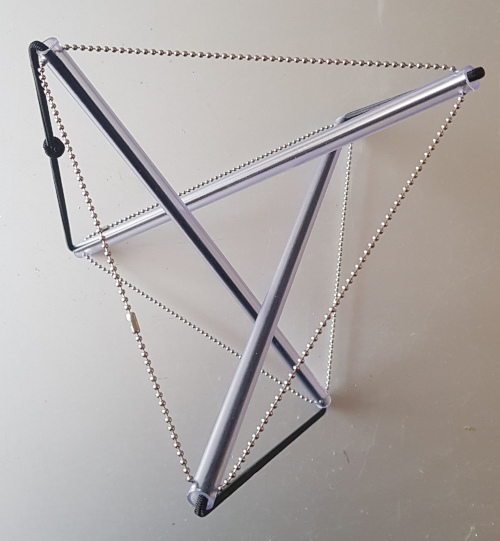 The single elastic cord loop makes its journey in a nice zig-zag, passing through the hollow tubes on the way. It’s a nice shape, and with a bit of pushing and pulling you can shift the cord within the tube and change the shape a bit. 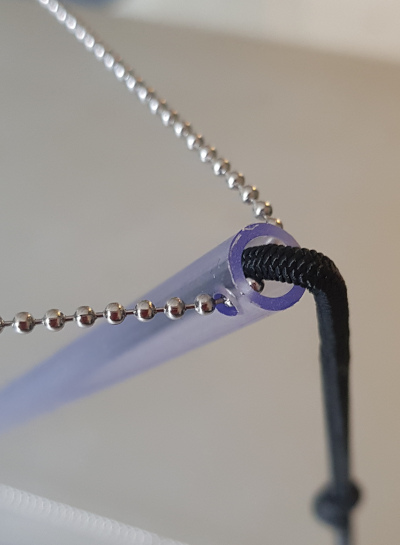 The ball chains pass through small holes drilled in the PVC tubes, and they go under the elastic cords. These can also be adjusted by pulling the balls through the holes in either direction.

A second degree of freedom!

The only thing that looks somehow imperfect, or at least not as pretty as it should, is the knot which turns the elastic into a loop.

We found a nice solution. We stuck the loose ends into a wooden bead and then added a drip of instant glue to the holes. The bead looks like it belongs.

This little twist had some new potential! It could have its shape adjusted in two different ways, and it remained in the new shape.

After staring at this new single-elastic twist for a while we realized that it was actually a hybrid of two very different kinds of tension.

We began to wonder what it would look like to stack two of them. On the top and the bottom were chains that were triangles of tension, so when two are stacked, the middle tension would have to be a hexagon.

Very nice indeed that the structure’s “equator” if you will, is a line of tension.

After building a few more identical structures, it was fun to make a line of them, each one slightly more shape-shifted than the previous, basically showing how it could be basically flattened, and by shifting the chains and the elastics around you could make it very symmetrical.

We began to realize that this was a very nice feature for people to play with, and it was also suddenly easy to pack a tensegrity into an envelope for shipping!

A customer receiving the structure would be able to incrementally change its shape until it was standing straight and proud. 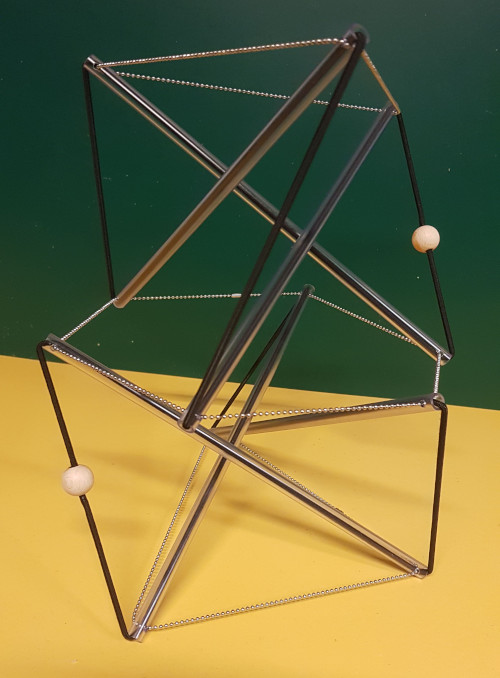 At the end of the year at the “Wijkpaleis” in Rotterdam, where the studio is located, they decided to cheer up the dreary holiday season by having a sort of store in the main area.

People would hopefully come in (although COVID kept things extremely limited) and hopefully buy some things from us and the other makers in the building, as gifts or whatever.

We jumped at the chance, because suddenly we had something that would be easy to manufacture, display, and sell.

I set up shop. I called the structure “Degrees of Freedom”. 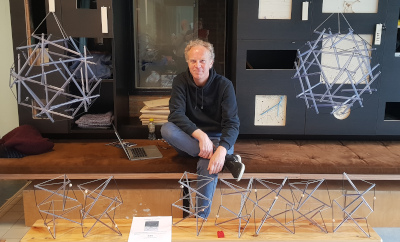 It was very much fun explaining to people what it was, and discovering what kinds of explanations worked.

For example, it wasn’t so easy to explain that all of these were identical to each other, just shaped differently by adjustments. 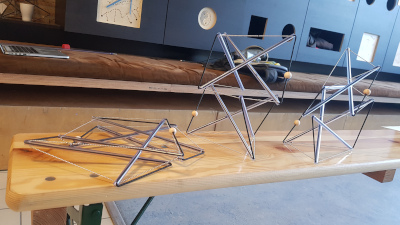 At one point I had a serious potential client who was very enthusiastic and admitted that she liked it. She kept changing its shape. 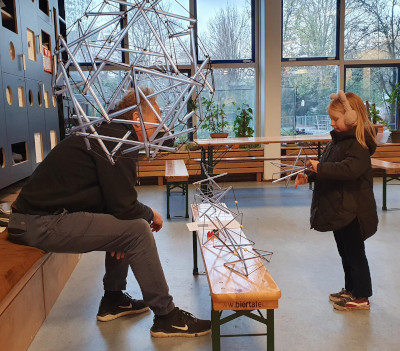 Unfortunately she didn’t have the cash on hand, so her parents had to chip in.

I passed one on to one of the makers down the hall here (people who make books), and they spontaneously discovered that this is not a bad way to display a book. Didn’t see that coming. 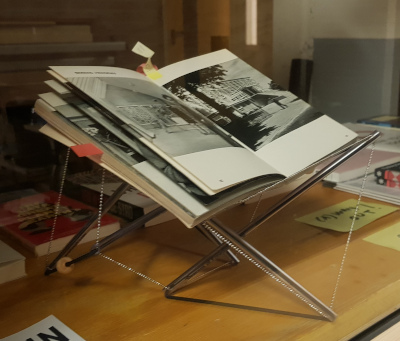 I myself ended up spending lots of time at the studio during the holiday season because there wasn’t much you could do given the COVID restrictions, so at one point I decorated a Degrees of Freedom with little magnets, for no good reason whatsoever. 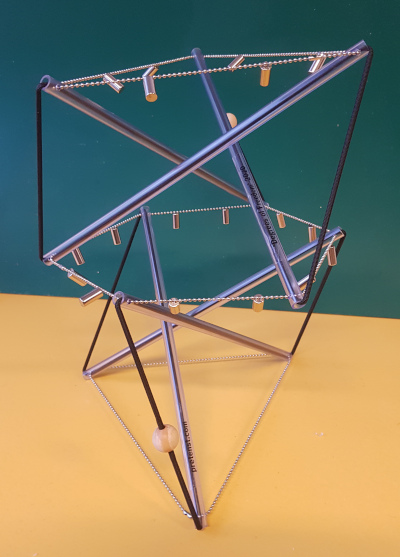 It started with just playing around with new materials and making the simple twist, but the hexagon of tension at the equator when two of them (left and right, of course) were stacked started to really offer some interesting shape-shifting flexibility.

Previous to building this structure, I would have thought that this was not really enough tension lines to make a tensegrity, but I was wrong. This was actually the absolute minimum number of tension lines (3 instead of 5!), and it still worked. That realization had consequences as you’ll soon see.

We got quite quick at building them, and eventually sent them to various people who ordered them from all over the world.

Each one has its own unique QR-code identity. They have been very well received so far, in Netherlands, Spain, US, Israel etc. 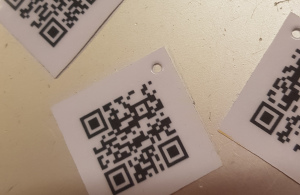 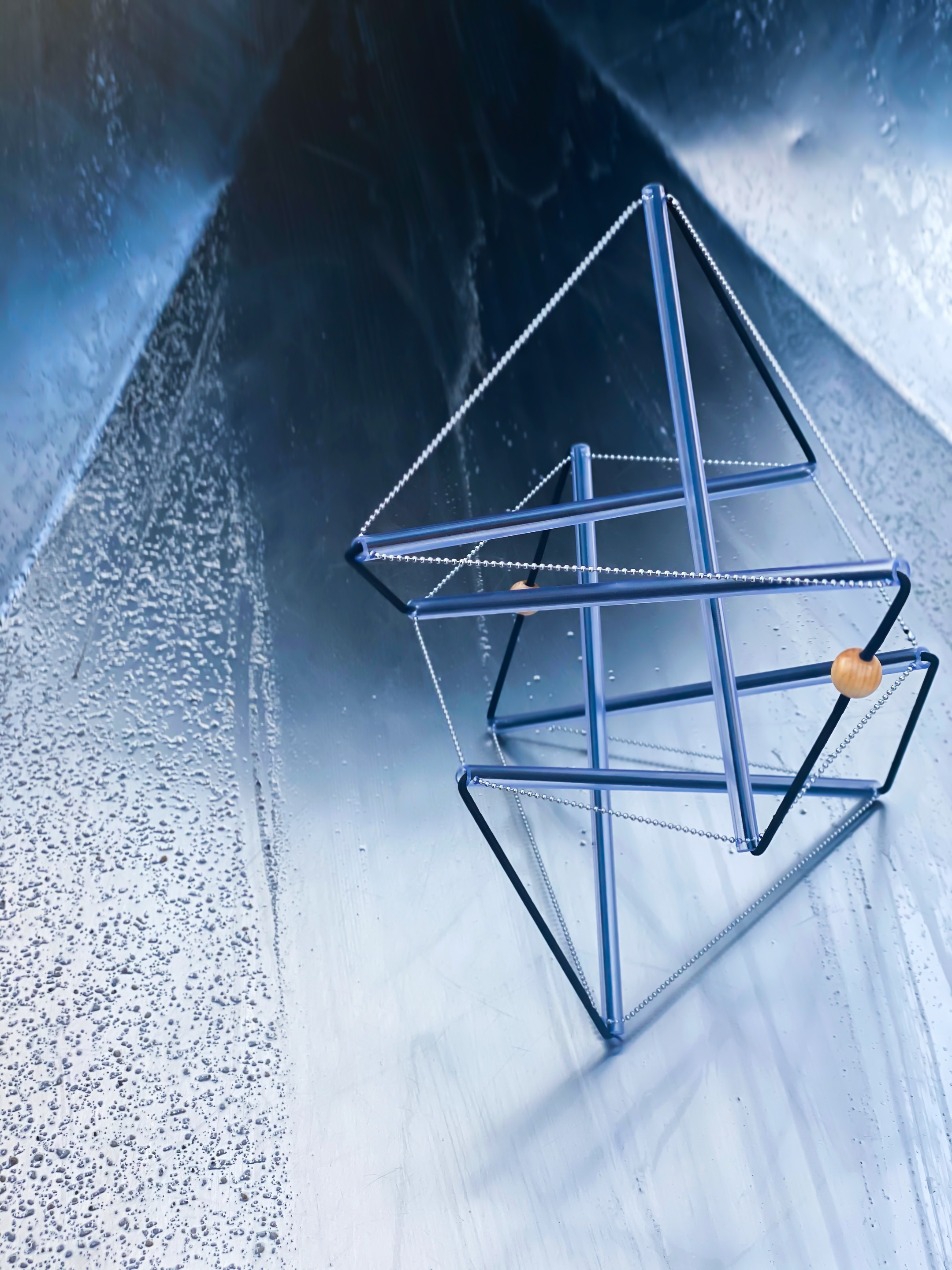 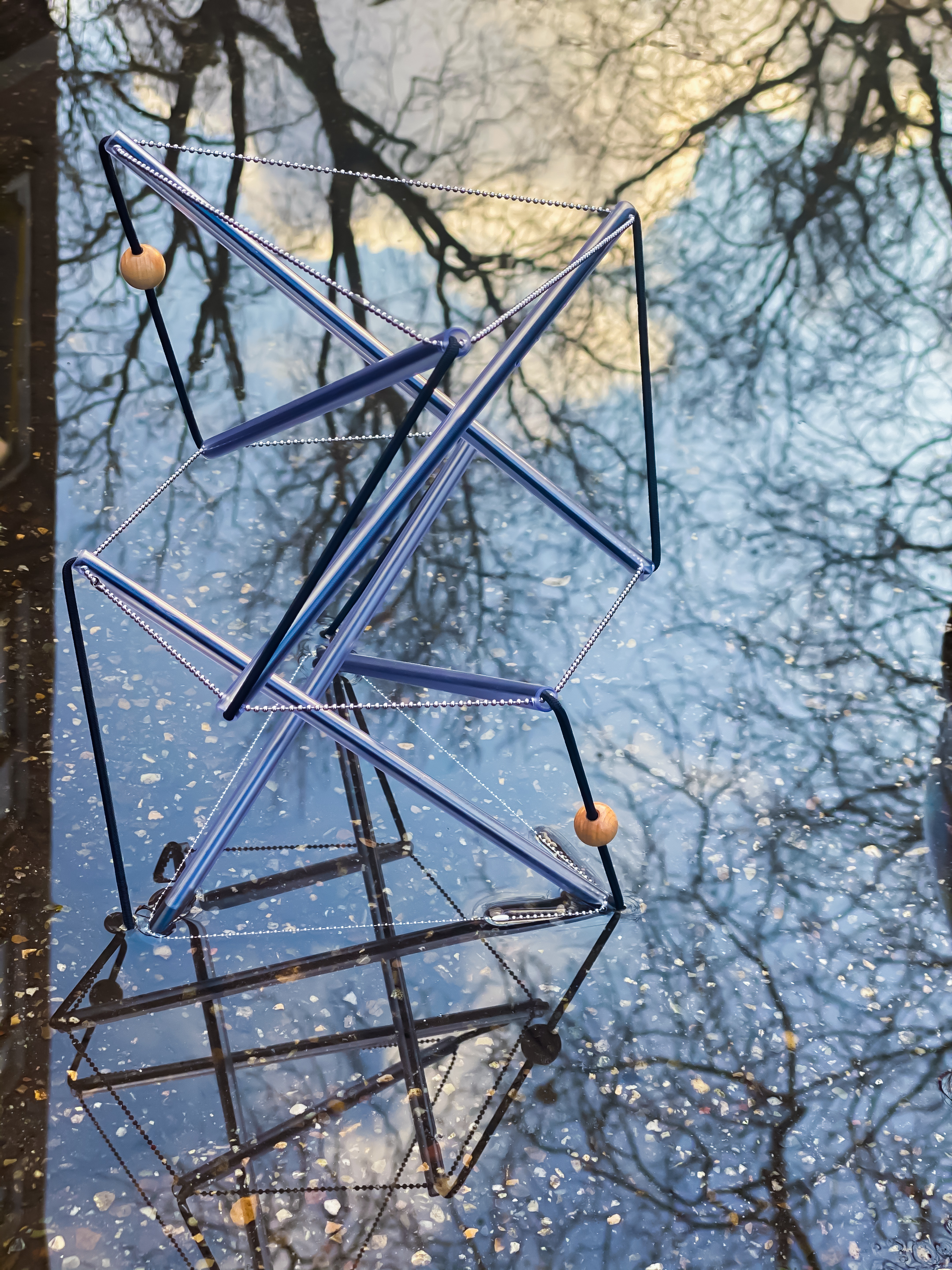