A while ago I built a strong tensegrity column out of brass and tulips, which has been a great structure to experiment with. The bars are thick enough that you never see them bending at all, and the Dyneema cord is strung very tightly and doesn’t seem to suffer from material fatigue much at all.

The tower has been standing here for many months now and I never need to tighten it up or anything. 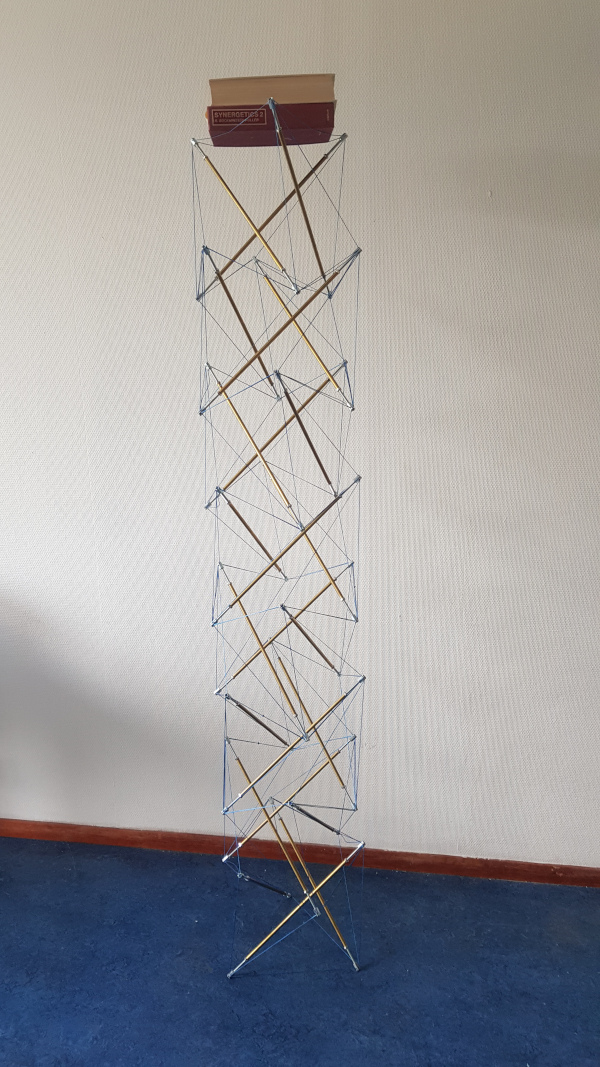 Every once in a while I pause what I’m doing and play around a little. I found that if you tick your finger on one of the upper points at the right frequency, you can start the tower resonating in an up-and-down wobble, especially with the Synergetics books on top. 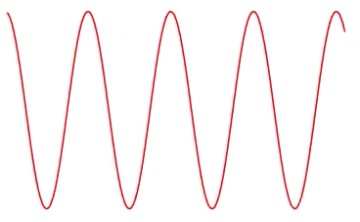 The whole tower acts like a big spring, and the books rise and fall tracing a nice sine wave through time.

If this tower is acting like a spring, I began to wonder what it would be like to pretense the tower as if it were a spring.

I added radial tension cords to the bottom, which extend from the three bottom tulips to the middle of the bottom triangle, leaving enough extra length so that the center point could be pulled up some. 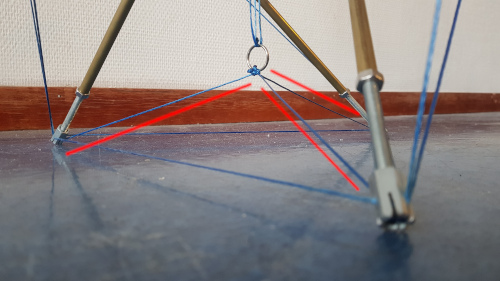 I also added radial tension at the top, which actually created almost a perfectly regular tetrahedron of tension. 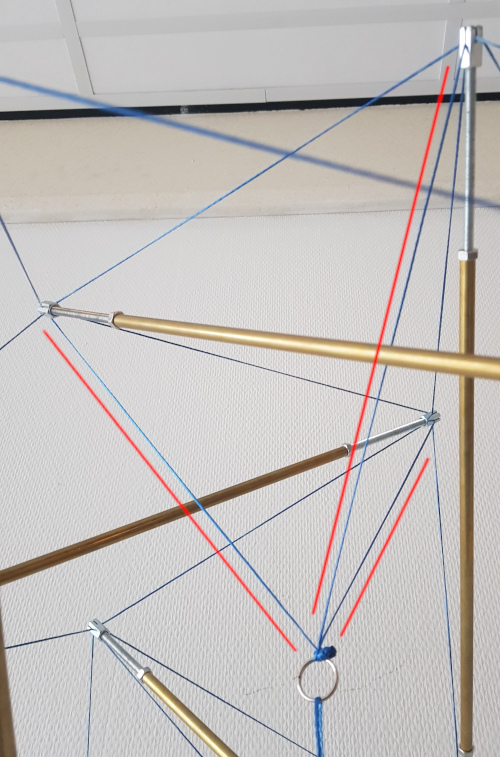 To both of them I added rings so that I could attach a Dyneema tension cord that went all the way from the bottom to the top.

I also added an “omnitwist” (6 struts, symmetrical) at the top to see how it would look as it continues on from the column twists. Nice.

The idea here is to connect the top and the bottom radial tension lines with an axial line down the middle to pretense the springy tower.

At the bottom, I made a very clumsy but effective trick that allows me to tighten and loosen the axial tension line which goes through both rings. This is nice because I want to turn it on and off, and I also want to see how far I can go in pretensing the tower a second time this way. 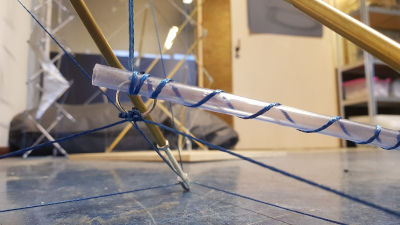 With this new adjustable tension, I was able to do some real-world experiments. By twisting the cord around the tube, I could pull the tower to be a lot more tense and rigid than it was. Effectively, I added the horizontal line here: 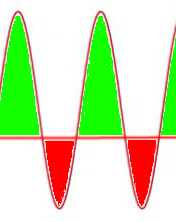 If enough weight is put on the tower, it could end up in the red zone, overcoming the axial tension.

However, for any amounts of force less than the axial tension, the tower appears completely rigid which is the green zone!

This was a rather shocking outcome! Hopefully the description and the images have communicated enough about the effect, but I doubt it. I want to show you what it feels like.

I made a little slow-motion movie to hopefully get the effect to show clearly and give you a better intuition about what’s happening.

The way the tower feels when it is axially pretenst is strange because, to a point, it is completely rigid. In other words, whenever the axial tension is tight, the height of the tower stays the same. Add another book on top, and nothing happens!

The resonance that we started with is gone altogether, and instead there is a very much higher resonance visible on each and every twist equally.

This is structurally interesting because it essentially replaces springiness with predictable rigidity. Certainly food for thought.

To make it even a little more fun, I made an animation of the computer model and added sounds. Sorry about that, gratuitous I know.