breaking a rule for the sake of symmetry

I think of the tensegrities that I build as following some very strict rules, and of those rules number one is probably bars may not touch each other.

That way tensegrities are always nothing more than a connected network of purely pushing and pulling things. There is no bending or shear stress worth considering (if it’s done well, I suppose).

But then I look at my own body, and my arms and legs clearly have a spiral nature to them which I have come to associate with the twists of these tensegrity structures.

That makes me want to try and put the two together, but when I did that, I came into conflict with my main rule.

Imagine any tensegrity structure, even a very simple one, and then imagine holding it up to a mirror. When you bring it closer to the mirror you can see that the twist in the mirror has opposite chirality, left vs right twist. 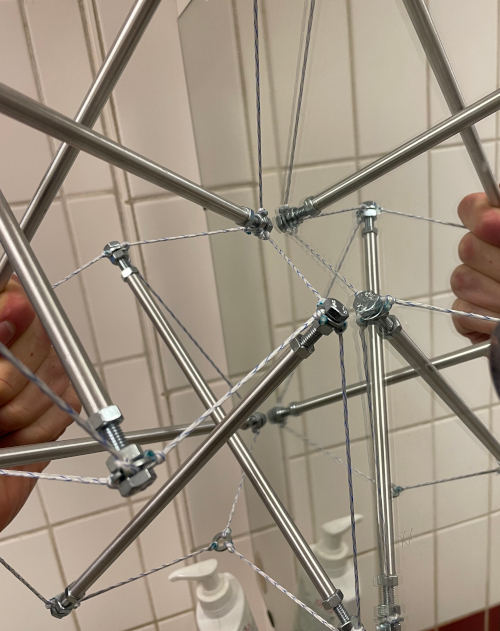 Of course your left hand looks like your right hand in the mirror as well. 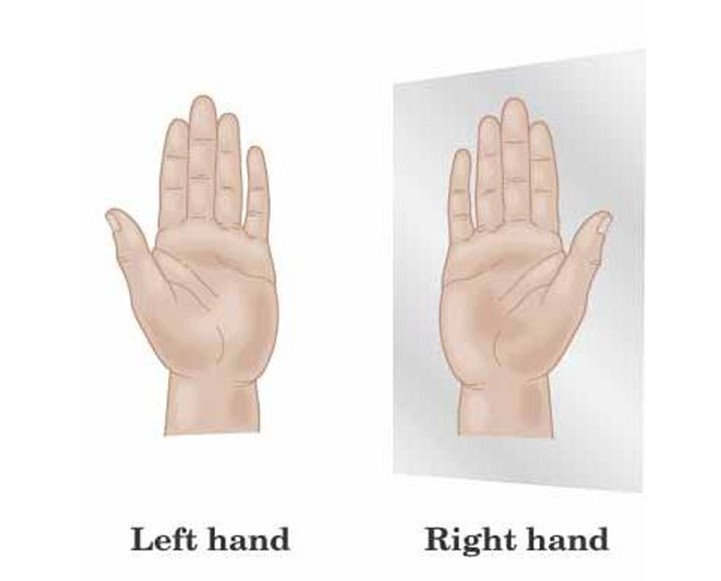 But that means that if you want to connect the two opposite tensegrities together (the real one and its mirror image), then bars are going to touch bars! 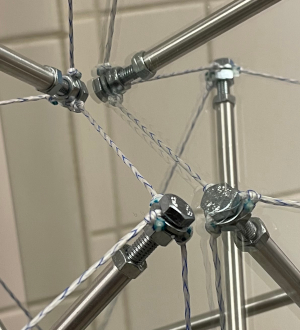 I guess that there is no option but to surrender.

To make a kind of tensegrity body, I will need the bilateral symmetry of the mirror image, but the bars that touch don’t have to make one straight bar.

In fact they appear to be often quite V shaped, so we can try our best and make it a hinge connection or an elbow, able to freely narrow and widen the angle between the two.

Compromise accepted, for the sake of symmetry.

I decided to try and build something like a body.

All the necessary machinery was already in place from my previous work with the app to explore this design space.

When I generate new branches of tensegrity with opposite chirality, the opposite twists look kind of like limbs.

By scaling down gradually while growing and doing a little shaping by pulling things together before freezing the design, I could generate something that looked pretty much like a human body.

Of course it lacked a head, but that was very much beside the point, given how well the rest worked, so I decided that headlessness could be seen as a feature rather than a bug.

The limbs were each a sequence of twists of the same chirality, but then later I even got fancy and switched to the other twist direction at more or less the “knee” and “elbow” locations. (You have to look very carefully to see this)

So it was time to build, and I started by preparing the right number of bars, each group cut to the correct size. 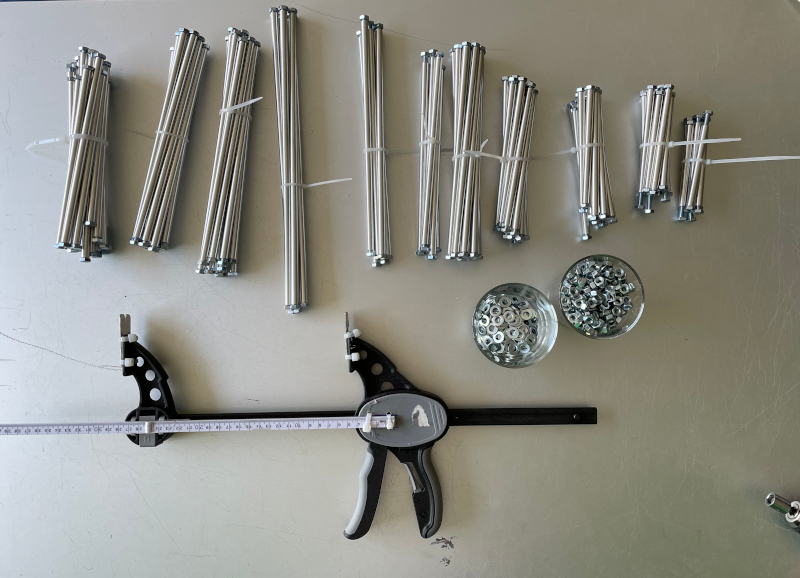 And now that I have my handy measuring tool for making any specific cord lengths to about the millimeter, I was ready to assemble.

I started at the bottom, building the two columns which would come together at the crotch to become the legs. It was useful to tape them down for now. 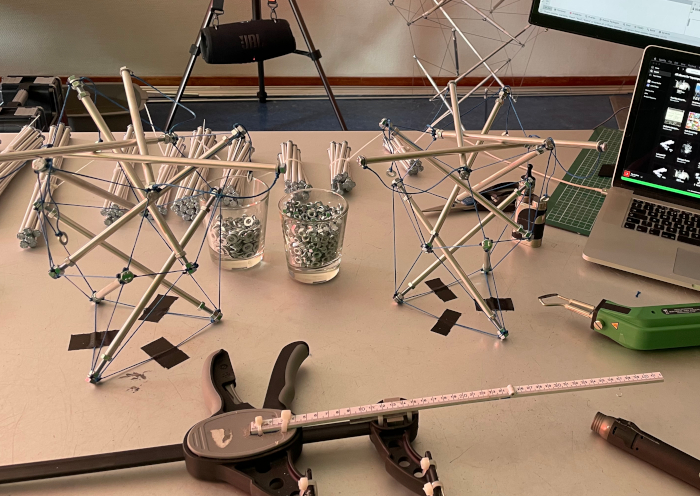 Every step of the way, I would have to read out the next cord length from the computer model. 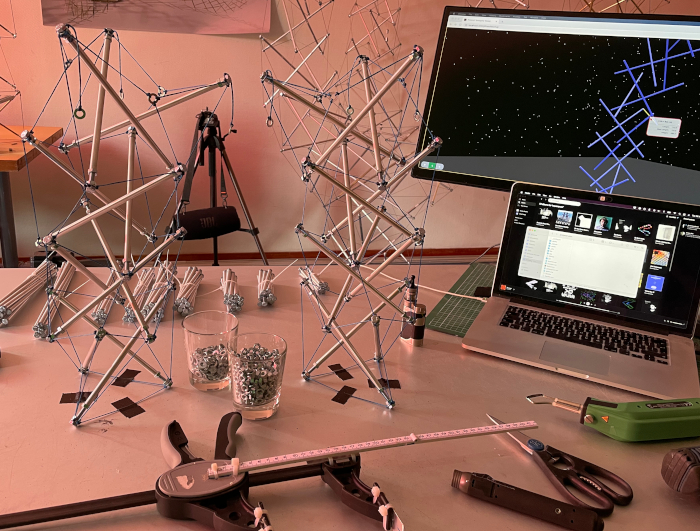 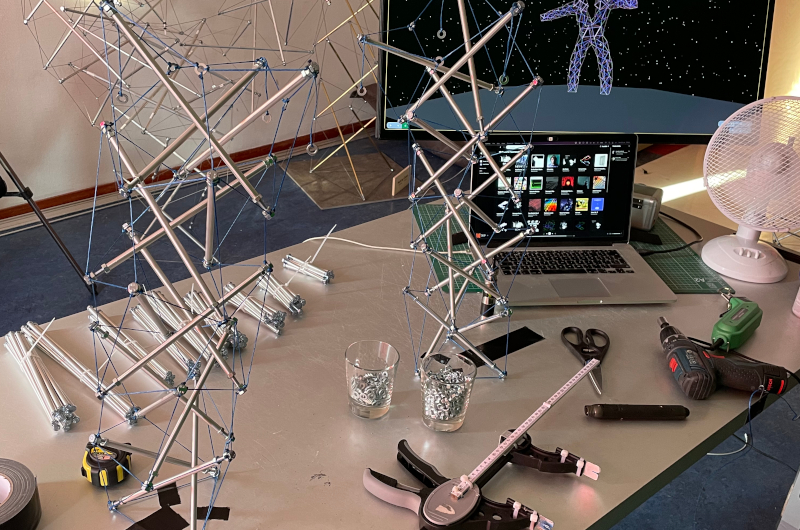 Now we get into trouble. I ask you, when is the crotch not a source of trouble?!

At the crotch, we have to break the rule. I cobbled together a limited kind of “hinge”, which could work because it really wouldn’t have to hinge much. 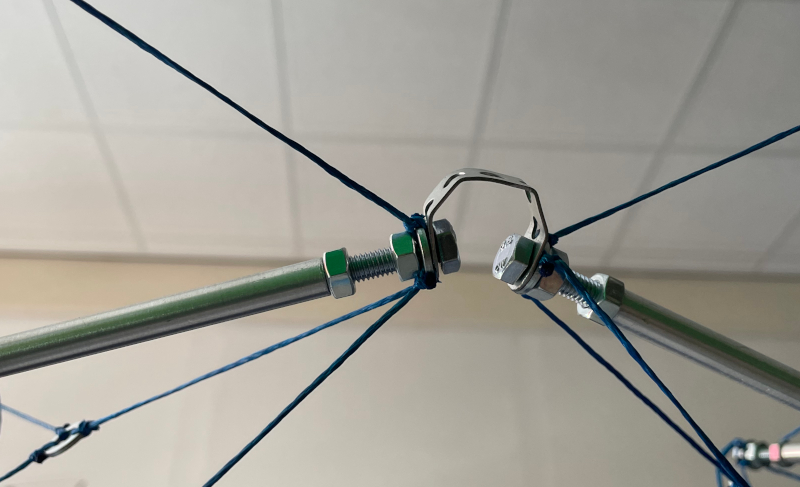 The bar ends that inevitably come close together (like in the mirror) when opposite chirality columns come together can be held carefully at a distance with this little C shaped piece of metal. 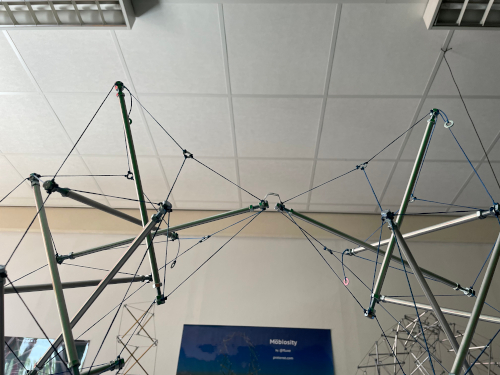 The legs have met at the crotch! Now to proceed with the abdomen and further.

The abdomen is one of those “omni-twist” that I talked about in the convergence projects.

Building this on top of what were two leg towers was fairly tricky. 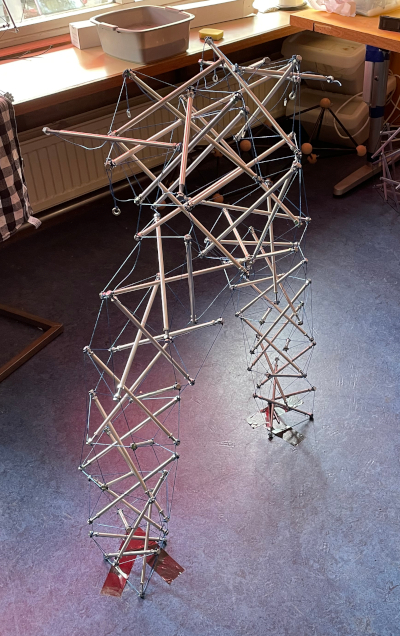 The problem of bar ends meeting is not only at the crotch but also at on the other side of the omni-twist, at, the bottom of the back.

And of course, there’s also no avoiding this situation in the armpits as well. Here I’ve marked all the rule violations with a green dot: 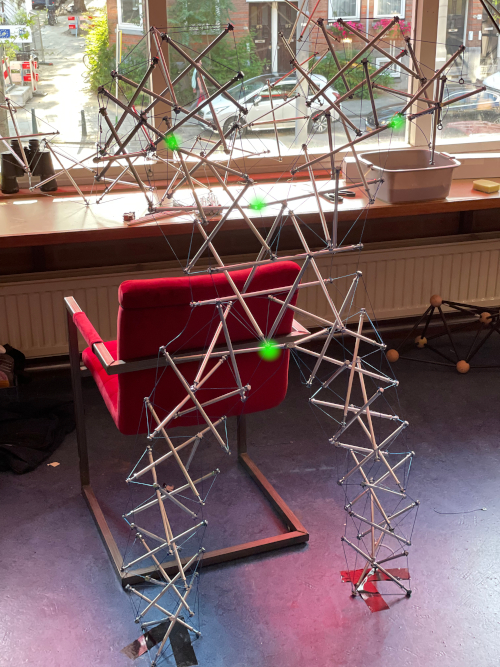 Now with the shoulders in place, all that was left was building down the arms. 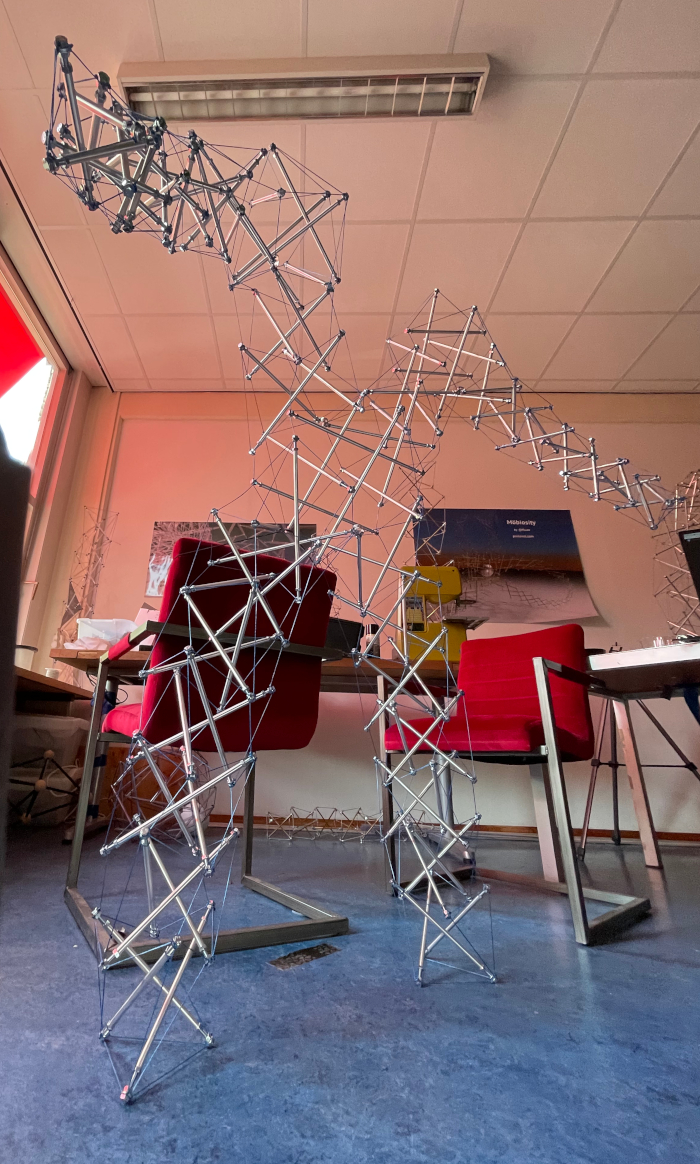 I took him out to the hallway for a picture. 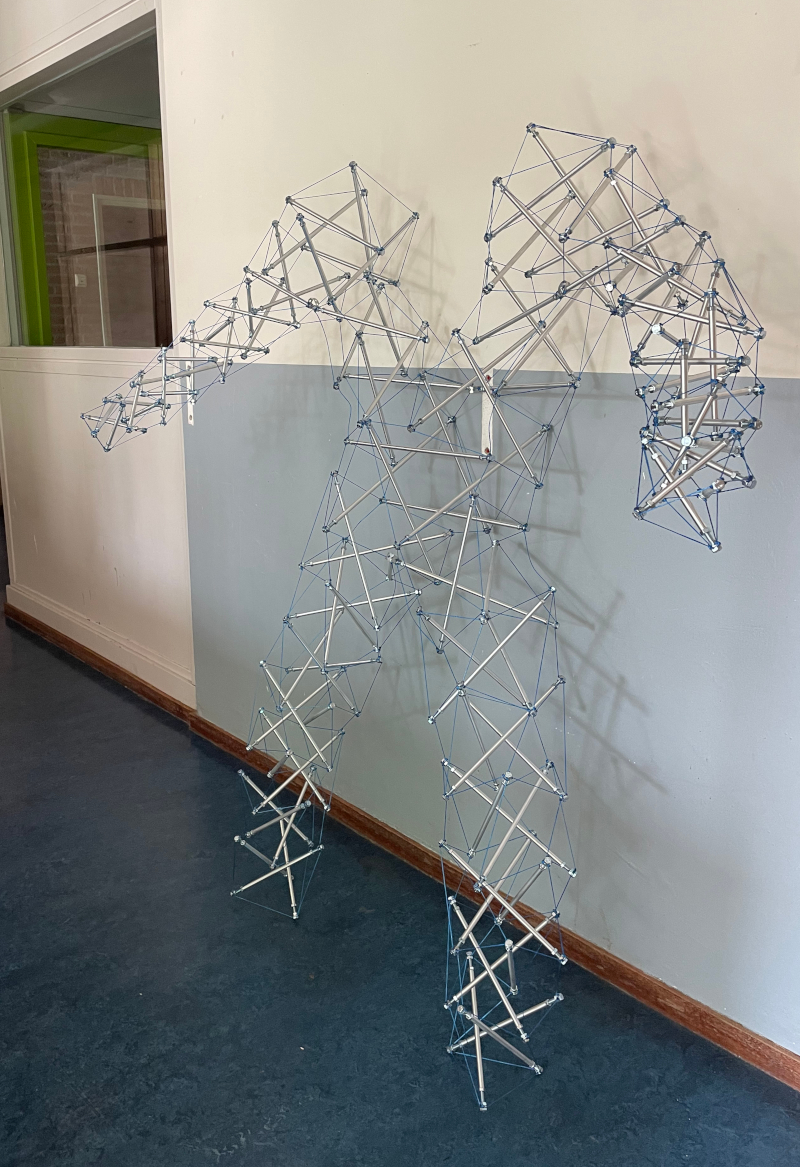 Let’s see what he looks like as a surfer! 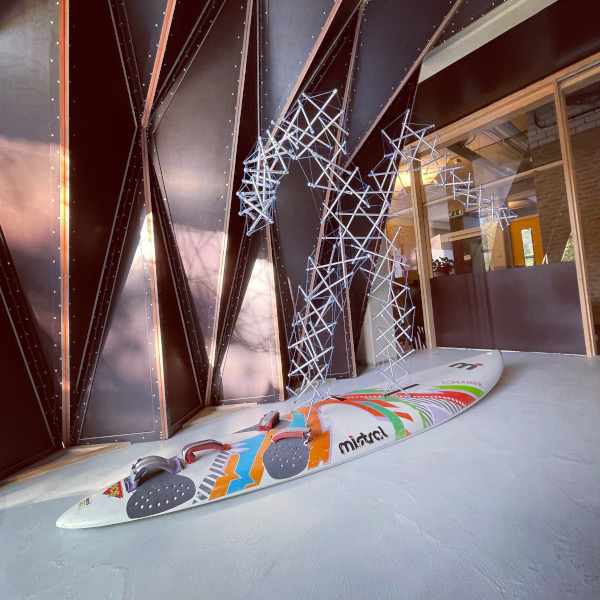 This project took literally from monday morning to friday night, a whole week of building. It was hard to break my main rule, but it was for a good cause.

I made the compromise by building hinge-like connections between bar ends which would otherwise have conflicted with each other, but as a result I was able to play with the opposing chirality or spiralness which we see in our bodies.